We MUST save Baloo!!!

And we need everyone’s help in order to stop such barbarities.

Wild animals belong to freedom, not to prisons!

Bears are NOT objects, NOR mascots and they MUST NOT live behind unfair bars!

What CAN YOU DO? Complaints! As many complaints as possible to ministries, authorities and anyone who could take action and make a difference. Only together we can offer Baloo a new life! A BEAR’s LIFE!

Baloo was thrown behind bars in the Straja resort – Hunedoara, since he was just a bear-cub. The little injured bear was found in 2000. He ended up in the household of Emil Părău, a local businessman. Since then, locals and visitors are celebrating each year Baloo’s imprisonment. Emil Părău prides as a good mother – that he saved the life of this bear. Sadly, the bear has paid the price for it, with his FREEDOM!

Although he has over 350 kilos, the bear remains trapped in the “claws” of law. Hunedoara’s Veterinary Sanitary Department has registered the place as MENAGERIE, and the City Hall of Hunedoara has issued an operating authorization for such an activity with CAEN code 9104, for zoo, botanical garden and natural reservation activities. Everything under the businessman’s company name, SC COMEXIM SRL. Today, this legal “trick” has still not received the necessary environmental authorization for its operation.

AMP has not forgotten Baloo and has been trying for years to gain his freedom, but the businessman can not be persuaded. 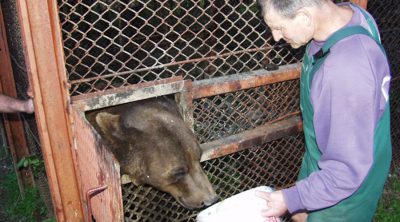