Skip to content
Home/Bears/Ten years of freedom: Cristi and Lidia 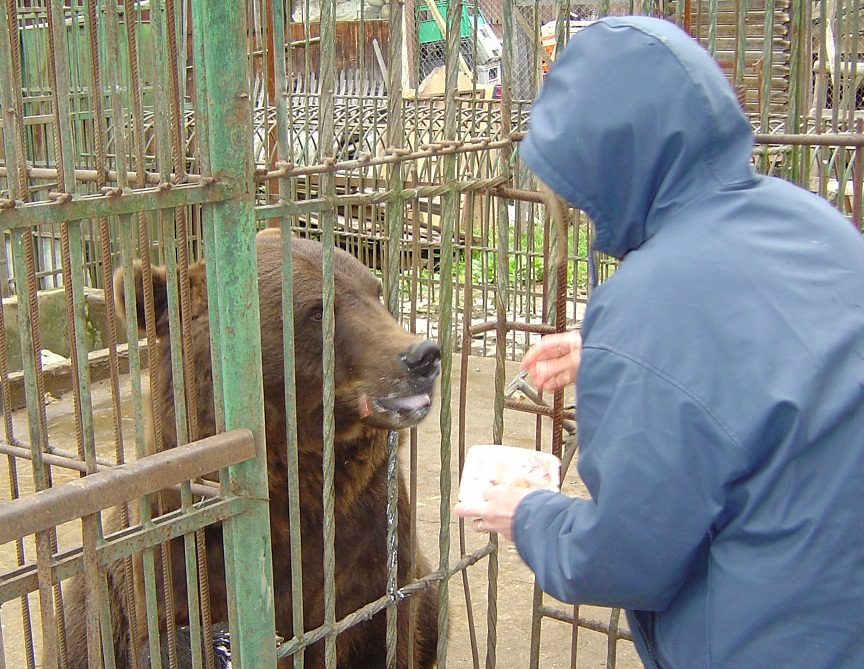 In the 90s, several bears were suffering in cages near restaurants in Brasov. Some of them didn’t survive to 2005, the year when the “Save the captive bears” project began. Maya, encaged near a restaurant in Bran, was euthanized in 1998. Two other bears—nobody remembers their names—died waiting for freedom near the “Poiana Ursului” restaurant and the Aviation Center in Rasnov. In Poiana Brașov, the only thing that remained of the bear Viorel was a paw on a plate. ”They didn’t have the chance to enjoy the freedom before leaving this world. They never saw the forest and didn’t have time to hear the wind or enjoy the rustling of the leaves and the twitter of the birds. They left this world, which offered them nothing but a miserable cage and contempt, as prisoners,” recalls AMP president Cristina Lapis.

”One day they would be free”
Cristi and Lidia, cellmates with Viorel in the cages of the “Ursul” restaurant in Poiana Brașov, did 23 and 13 years of hard time. Among broken glass, dirt, and visitors with video cameras, Cristi and Lidia used to stand up on two feet, begging for food. It’s sad to know that this restaurant didn’t even give these bears water. ”We used to go every day with our friends to the scene to bring them food. After preparing them milk with rice and dog food, we traveled to Poiana Brasov. I knelt next to their cage and promised Cristi and Lidia, with tears in my eyes, that one day they would be free,” says Lapis.

Inseparable!
Thanks to World Animal Protection (WAP, formerly known as WSPA), work on the sanctuary was in full swing. The project had taken its first steps, and back then the sanctuary consisted of one enclosure and a quarantine area. Cristi and Lidia arrived here on the August 31st, 2005 and remained inseparable. ”Cristi and Lidia are now 33 and 23 years old. They’re still together now and are running free in the forest, taking long baths in the sanctuary pools, playing in the snow, and climbing trees. Cristi has lost some teeth, and Lidia has arthritis caused by the long years she spent in that wet and dirty cage. They know my voice, and appear whenever I arrive at the sanctuary. I’m happy to observe them from afar. I no longer call them to the fence as I used to do when I brought food to their cage. Their names, as with the other bear’s names, are a sad legacy of their past as prisoners, as if they were branded. They don’t owe us humans anything. On the contrary, we must hope that they will forgive us for all the suffering they had to endure!” says Lapis.

Libearty—the only life
Today, seventy-nine bears live at Libearty, and five others were given the best moments of their lives here. Some of them lived just one year; others, like Ursula the Tibetan bear, lived seven. To her, those seven years were a lifetime, a life stolen by heartless and ignorant people who locked her in a cage without thinking for a second that they were depriving her of a universal right: the freedom of living beings. Despite sustained efforts, tens of reports, complaints, discussions, and statements in the media, Romania still has bears living behind bars. At Straja, the owner of a cottage has found a loophole allowing him to “hire” a bear as a mascot, to attract tourists to ski. In Arad, in a rusty barrack, seven other bears are waiting for justice to do its job.

“Love and compassion are a universal religion” – The Dalai Lama
This autumn, “Millions of Friends” will organize several events to celebrate the freedom of the bears in Romania. Until then, our efforts are focused on our visitors, who we hope will leave our sanctuary with a strong desire to defend all animals’ rights to life and freedom. “For those bears, we need people who believe in freedom, in the power of laws, and in the idea that Romania must remain a country where the bear is still the King of the Carpathian forests.” says Lapis.