End of suffering for the Sochi bears 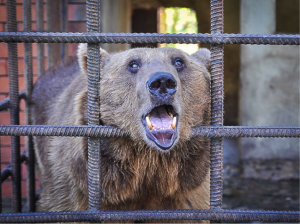 The rights of animals have earned a new victory in Russia, and AMP has contributed to this. The two „alcoholic bears” have been confiscated by the Russian magistrates, after an international campaign conducted by the animal protection NGO’s. The campaign has raised 130.000 signatures from animal lovers who demanded the confiscation of the bears from a dirty cage next to a restaurant in Sochi where restaurant visitors delighted in feeding beer and junk food to the bears. The petition also urged the government to allow the bears to be sent out of Russia, to Europe’s largest bear sanctuary – Libearty, in Zarnesti, Romania.
The Ministry of Environment from Russia has followed the court order and confiscated the two bears but rather than allowing the bears to live in the Romanian forest sanctuary, they placed them in an animal shelter in Moscow. The shelter already has rescued bears which they keep in large caged areas. Whilst is not the perfect solution, we are glad that the bears will get a good diet and hopefully vet care.
“They were living in awful conditions, in a filthy cage, among garbage. We hope that this solution is only temporary and the Russian authorities will decide eventually to let the bears be moved in the Romanian sanctuary”, says Cristina Lapis, AMP president. AMP collaborated with Word Animal Protection and The Big Hearts Foundation for this action. ”We are now in contact with the administration of the Moscow Rescue Center and have invited them in Romania to see the condition in which the bears can live in a natural environment. We hope that they will consider transferring the bears to the Romanian bear sanctuary where they can enjoy a huge forest area.” said Victor Watkins, wildlife Adviser for WAP.