TERRA AND PLUTO FROM RESITA 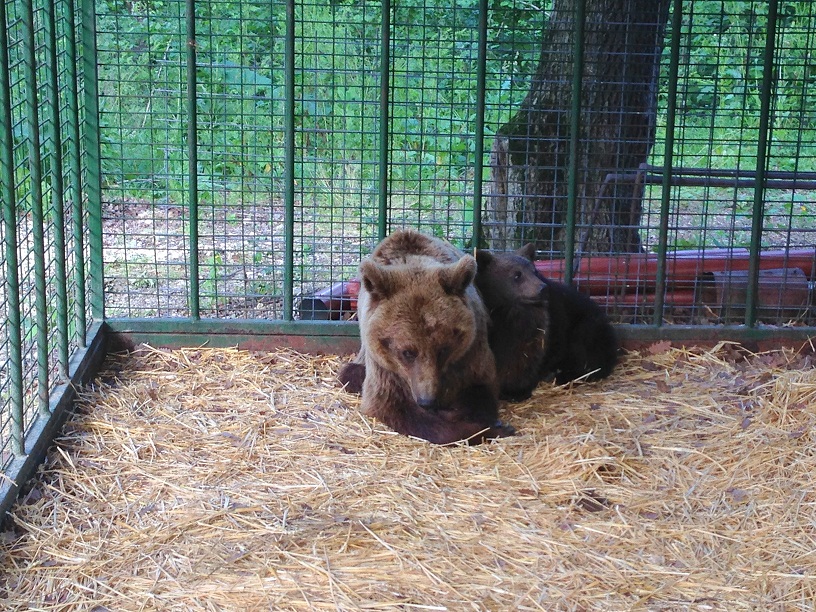 Romania is one of the few European countries – if not the only one – that’s received European funds to rehabilitate its zoos. The Resita Zoo (or ”Dr Ioan Crișan” zoo) in southwestern Romania is among the zoos that have received such funding. But after a €2,000,000 investment to upgrade and widen spaces for animals, several bears there still remained behind bars.
A year ago, after receiving complaints from animal lovers who deplore the zoo’s conditions, the Millions of Friends Association (AMP) began discussions to take over these animals. At the time, the zoo had five bears, and three of them were serving their sentences in rusty cages. Last fall, the zoo administration engaged in an exchange of animals with Targu Mures Zoo, receiving a sick bear who died a few months later under unknown circumstances. Suffering under the same conditions, an eighteen-year-old female bear gave birth to two cubs at the end of winter, out of sight in a rusty cage. To protect the cubs from the life their mother was sentenced to live, AMP offered to take them over. Being so small, the cubs would have the chance to be rehabilitated. At the end of April, a few days before performing the rescue action, the zoo administration asked to be paid for the bears, with the ease of someone selling old shoes in a secondhand store. AMP refused to finance this unlawfulness, and informed the environmental authorities. Under pressure from the media and local authorities, the zoo administration and local officials had to surrender, but not before making one last attempt: they put the bears on sale, taking out ads in local and national newspapers. Their greed had side effects: public opinion condemned their action and imposed the pressure needed to make them surrender the animals. In barely a week, the zoo administration asked AMP to take over the bears.
The mother-bear, Terra, and her cub Pluto were transferred to the Libearty Sanctuary. Unfortunately, Pluto’s brother or sister didn’t have the same chance! The bear disappeared, and the zoo administration succeeded in covering their tracks without any fear of legal consequences.
The only male bear owned by the zoo was sterilized and relocated to a suitable enclosure. Today, thanks to the sustained efforts of AMP over the last year along with the intervention of competent authorities and the media, the bears from the Resita Zoo have regained their dignity and will enjoy the freedom that others have had stolen from them.